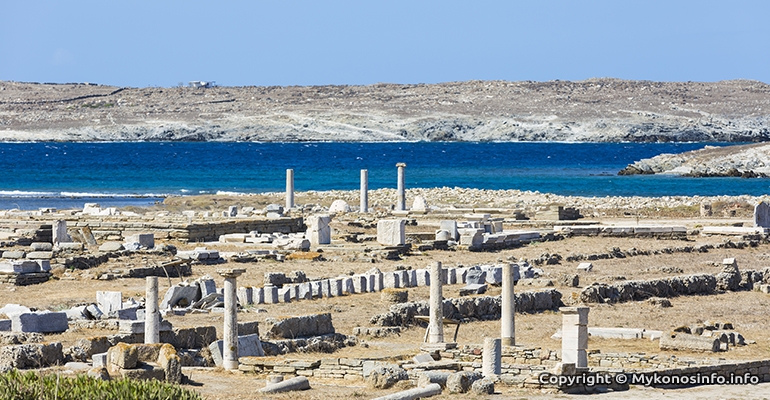 According to mythology, Mykonos took its name from the hero called Mykonos, son of the King of Delos. Prehistoric is considered that the island was inhabited by various tribes, such as Kares, Phoenicians, Minoans. Around 1000 BC, the Ionians settled on the island.
Later Mykonos passed to the Romans and then to the Byzantines, who maintained their control until the 12th century, protecting the island from pirates.
After the fall of Constantinople and after the Fourth Crusade (1204), the island was occupied by the Venetians.
In 1292 it is plundered by the Catalans and in 1390 is reconquered by the Venetians.
In 1537 the island was destroyed by Suleiman the Magnificent Barbarossa.
During the Ottomans the island remains virtually self-governing. After Tinos get to the Ottomans command in 1718, the Venetians leave permanently from Mykonos.
Due to its geographical position is converted into refueling point for foreign merchant ships. Mykonians as they were good sailors, dealt successfully with trade and shipping, and many took the lead in Orlofiki revolt against the Turkish in 1770.
With the outbreak of the Greek Revolution of 1821, the islanders, rose with the led of Manto Mavrogenous, who was a heroine of the island, and actively participated in the revolution with four warships. In 1822 they repel successfully the attack of the Turkish ships.
After the founding of the modern Greek state and the liberation, Mykonos consolidated in trade relations. The dominance of technology in the traditional trade in the late 19th century and the opening of the Corinth Canal and the upheavals of World War II led to the recession and the increase of migration to urban centers.
With the archaeological excavations at Delos, Mykonos gained tourism and local economy development.